The Cape Town Marathon was supposed to be a very special event - my wife's very first full marathon. And it became a success for her.

We ran together all the time. By running with her, I wanted to give back some of the support she's giving me for all of my extreme events.

It's been a great experience that we were able to share. For me it's been great to run without any targets for a new personal best and I was able to know all the time how my wife's been doing. Since I prepared her training plan, I was curious to see, if it worked.

Both of us are using a Polar RS400 running computer. For the race, I did not take my running and heart rate sensors with my. My wife did of course, and it happened to be great, since my Polar picked up her signals. So I was able to monitor her data all the time and didn't have to ask her all the time how she was doing.

The race itself, the full Cape Town Marathon, is a big dissapointment. The route takes you through a lot of shabby or not attractive areas of Cape Town, including several up- and downhills. It's definitely not a flat race, as promoted by the race organizers. The worst thing: you're running on public roads which were not closed for traffic. So you had to watch the traffic all the time, including running on highways...

The worst part were the last 10 km. The route went through very nice areas like the V&A Waterfront, Greenpoint and close to the Worldcup Stadium. But the layout of the route has been so silly, that there was no atmosphere at all.

Oh yes, the atmosphere: Since the race organizers don't do any sort of public relations for the event, there were no spectators at all! Only a few people at the finish line, which we appreciated a lot, but throughout the race no spectators.

I can only advise against participating in this Marathon, because the organization was far away from beeing  professional and good. I had so many good experiences with race organizers, especially in South Africa. But this event is a bad counterexample.

For my wife and me it's been a fantastic experience we were able to share together and I'm very proud of her. We were holding hands when we crossed the finish line and celebrated this success with a fine dinner later that evening. 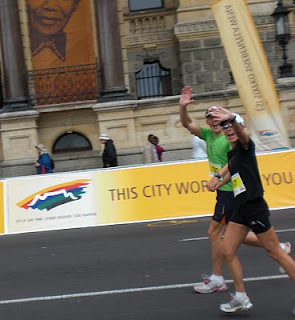