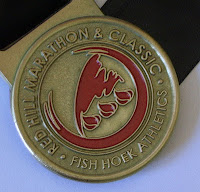 It's done: I finished my first full marathon for 2012 - the Red Hill Marathon of Fish Hoek, close to Cape Town.

Now back to the race: Red Hill is my qualifier for the Two Oceans Ultra, which was my first intention to run it. Since it's also a very scenic run in the area of the Cape of Good Hope National Park, it's been a very good choice. The organisation is great, water tables very excellent organized.

And then the sun came out and the hill showed his tooth, and gone was the idea of a great time. I knew the heat could become a problem, with 30°C during the last few days. So I changed to my minimal goal: an easy finish in about 3h40. But from km 17 on it went uphill most of the time up to km 29...

It was not an easy run at all... I paid my toll to the heat and there was a time during the race when I was scared not even running a sub 4h run. Unbelievable. That's been a tough mental game, and in the end I won it and was able to finish in 3h52 at place no 112. This is my worst marathon time ever... so we forget it immediately.

I was so dehydrated, even that I consumed water and Coke at every single water table (!) what I usually never do, I poured in 3 liters of liquids into my body within 1.5h after the race. And I "gave back" approx 250 ml ;)

If you look at my average heart rate of 161, I was not running as hard as I can - but the heat made it impossible for me to run faster.

Now: The minimal goal of finishing the marathon as my qualifier has been achieved, the entry form for Two Oceans has been signed and now I'm recovering with some good food ;)

Next week I'll be training less from an athletics perspective, instead I'm going to train some executives for my clients in leaderships skills.